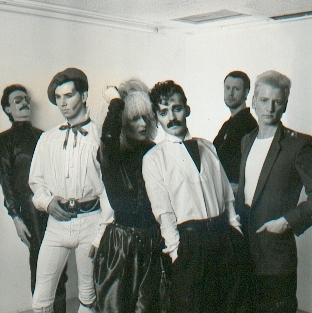 This article, credited to Anna Johnson and Oliver Harris, appeared in the Greenbelt 1980 programme.

Famous Names in the public eye

If you were to ask me for a list of my favourite bands, then Famous Names would undoubtedly be hovering somewhere near the top. The roots of this bright new band, comprising Steve Fairnie, Bev Sage (vocals), Steve Rowles (rhythm guitar and vocals), Jules Hardwick (lead guitar), Arry Axell (drums) and Les Cargo, the recent addition on bass, stretch back over ten years to a folk duo hailing under the name of Fish Co. Looking back, it seems that as they moved further away from the heart of the Christian scene, practically whatever they did was deemed unacceptable and met with criticism.

In the beginning there was Fish Co, a humorous pair (Fairnie and Rowles) with a clearly defined message. Fairnie looks back with some pride at his past, feeling that he and Rowles approached the idea of communicating their faith creatively, something he sees lacking in many of his contemporaries.

As their popularity grew they were booked into places where to entertain would not suffice, and so the duo expanded into a six-piece and their emphasis shifted. At this point they were still playing for Christian organisations and had no qualms about sharing their faith, but when they embarked on the club circuit they were booked as musicians, not evangelists, and performed accordingly.

On a rainy evening in June I met with Bev Sage and Steve Fairnie in a pub in London’s Wardour Street, just around the corner from Trident Studios where they were recording a new single.

Bev explains the situation and their aims as the band developed. “As Fish Co we had specific aims in mind. We wanted to make the Christian sub-culture actually think about what they were saying because people were accepting certain values and principles and we wanted to shake them up and say ‘Are you really sure of what you’re saying?’ we weren’t actually a message band.”

Shake them up they did, consequently receiving both criticism and acclaim, much of this appearing in the pages of Buzz Magazine.

Following their mixed reception at Greenbelt ’78 they shifted into top gear and Writz burst upon the scene amidst ecstatic reviews in the music press, seeming far-removed from their humble gospel beginnings. Writz concentrated solely on their music, and Christianity, to the bewildered observer, seemed to have taken a tumble, ‘seemed’ being the operative word. Writz appeared totally alienated from the Christian scene and rumours were rife that they had pitched their tent dangerously close to Sodom, their highly graphic stage-show meeting with a lot of stick. Last April Writz became Famous Names, perhaps an oblique reference to their future aspirations, but this occurred mainly to avoid confusion with Ritz, the poor-man’s British answer to Chic, who took advantage of the situation and cashed in on the hard work of Writz, reaping unjust rewards, especially in France.

What about those nagging reservations many Christians seem to have towards what Famous Names are doing? Steve explained: “I think it’s hard for come Christians who’ve seen us as Fish Co to understand what we’re up to. Unfortunately, playing in a band isn’t specifically about ringing up everybody who’s ever heard you and explaining what you’re trying to do. It’s quite simple really; we’re just trying to provide good music and good entertainment, which we think is right for us at the moment. So the content is slightly different than in the Fish Co days. Maybe some of that will come back.

Famous Names stress that they see their situation as an open one. To quote Steve – “Where rock’n’roll is concerned there is no distinction between sacred and secular.” He even goes so far as to say, regarding his past: “I wouldn’t go back to being part of the sub-culture at all because I don’t think it should exist!” They have no desire to draw a large Christian following because of their faith, but wish to be judged by their music.

Bev takes up the argument after the obvious comparisons have been made between them and Cliff Richard or Bob Dylan: “The crux of the difference is that characters like Dylan and Cliff, having come from the secular scene, are always more dramatic because they’ve got a whole history of rock’n’roll behind them and for that reason people are interested in their beliefs.”

Steve continues: “People like that have shown that they are really good at playing music, so I want to know what makes them tick. I don’t think we’ve become good enough at entertainment and music yet, for people to be interested in what makes us tick.”

So Famous Names want to be famous, that intangible mode of existence, quantified by the number of autograph books thrust out by the craving masses. And yet the concept of fame, of one individual being elevated above everyone else always strikes up an uneasy feeling within me. I quizzed Steve on this point, Bev having slipped away to add some vocal frills to the new single. Fairnie stresses that their on-stage and off-stage roles are not the same, the former being an exaggeration of the latter: “When you’re being creative it comes from a very strong personal viewpoint, you’ve got to exaggerate. It’s in the nature of performing to be larger than life.”

Alright, so on stage they have their moment of fame and glory, but what about the other mundane 99 per cent of life? Fairnie compares the situation with that surrounding the captain of the school rugby team. The others are perhaps jealous that his position wins him greater attention. But what about when the captain comes off the field?…

Needless to say, fame is characterized by its illusion, as Writz discovered throughout 1979. Having signed to Electric Records, they released one single, ‘Night Nurse’, and an album simply entitled Writz but both failed to make any impression on the charts. With the release of the second single ‘Movies’ imminent, Electric Records collapsed under the strain and Writz found themselves inextricably bound to a company that existed only on paper. The ensuing legal tangle was complicated by the fact that Fairnie fell seriously ill. The way ahead having been disencumbered, Famous Names signed to Trident Studios, affording them practically unlimited use of one of the most expensive studios in town, and they hope to get a distribution deal with one of the larger labels.

Live, Famous Names are one of the most imaginative bands around, bursting with colour and maniacal energy. Bev and the two Steves front the band, whipping up a maelstrom of weird vocals and an abundance of eye-catching visual effects. The lead guitar is handled with the maestro’s touch by Jules, while Les Cargo and Arry are, according to Steve, “striking up a really red-hot relationship in the rhythm section”.

At present there are plans for an elaborate autumn ‘circus tour’, complete with lady wrestlers, a dance troupe, a fire-eater, as well as some other famous names; so bung on the old roller skates and check them out.