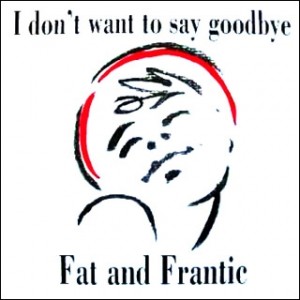 Fat and Frantic made a name for themselves on the contemporary Christian circuit in the 80s with their wacky approach to making music, which was a mixture of skiffle, folk and out-and-out pop, their oblique songs featuring eloquent titles such as 'Last Night My Wife Hoovered My Head'.

Gradually the gigs and the following grew, culminating in a sell-out tour with fellow anti-heroes Trev and Simon. Fairnie had been regarded as a major influence from day one, and was called in to direct a video to the Fat and Frantic anthem 'Brian', filmed in the depths of the hall of mirrors at Wookey Hole. Fairnie also went on to produce ditties such as the 1990 single 'I Don't Want to Say Goodbye':


The band fizzled out but reunited for an a cappella performance of the old Fish Co number 'Precious Lord' at Fairnie's funeral in 1993. This led to the more economically-named FAF recording and releasing a whole album of vocals-only songs, fittingly entitled 'Precious Lord' and dedicated to their former producer... The band sporadically get back together, see www.fatandfrantic.com

Here they are, with friends, performing Precious Lord in 1995:


Other musical connections include Scottish band Lies Damned Lies. Dot Reid, Charlie Irvine and Steve Butler formed Lies Damned Lies after a period in the mid-80s spent trading as Talking Drums. After several attempts to break into the big-time mainstream (most notably through a series of massive-sounding Stuart Levine-produced singles such as 'Love Among the Ruins', 'Lonely Together' and 'Say You Won't Forget Me'), the band focused on what they do best: melodic, moody, meandering, ambient pieces that fall somewhere between Blue Nile, Prefab Sprout and David Gray.

Fairnie artwork turned up on the cover of the Lies Damned Lies compilation 'Retrospectively'. In the liner notes, Lies Damned Lies refer to Fairnie as their "friend and mentor during the mad years".